0 Items
Back to Blog

A year ago, I was standing in the kitchen of an acquaintance’s house that I agreed to house and pet-sit for. I swayed with Maddox on my chest, stirring the pot, while Scarlett carefully eye’d Martha The Chicken at the patio door. I made minestrone, and baked bread for the three of us. I poured a glass of wine, and stared out over the trees until Scarlett’s voice interrupted my zoned-out, yet laser focused train of thought.

“What are you thinking about, momma”?

If she only knew.

We ate outside on the deck. Maddox bundled in a blanket, bouncing in the seat I packed for him, Scarlett asking for more butter for her bread, and me envisioning a life far away from here in between picked-at bites of soup.

We drove the three hours back home (home?) the next day and I told my then-husband that I wanted a separation.

I told him that this time I meant it, because I did.

I’ve been lonely as long as I can remember.

As a child to a single mother that wrestled with her own loneliness and addictions. As an anxious adolescent that was hyper-emotional and oftentimes lashed out. As a young woman who found escape in a collection of addictions herself. I was lonely in my marriage. I am lonely as a single-parent.

Unsurprisingly, the swiftness in which relationships can come-and-go, I feel my loneliness amplified. Is it actually ironic that the relationship I wanted to work out most, more than my marriage or ones that came before, also ended as soon as the leaves began to fall?

I’m not so sure anymore. What I am sure of, is the ways in which the closing of one chapter forces us to reflect on the book as a whole.

In the year since I wanted out of my marriage, I did what I thought was a lot of sitting inside my own loneliness, and being okay with being alone.

I’m not afraid of being alone. Solitude and loneliness are not the same. The specific kind of loneliness, a lifetime’s worth, is haunting and sits in the corner of my mind. Being physically alone isn’t what bothers me. It’s the feeling of loneliness that sleeps with me at night, and crawls under my skin that frightens me.

I spent the first eight months of my separation literally propelled by the importance of Making It, and didn’t give my loneliness much thought. There were too many arrangements to be made. Where would we live? How would I pay for it? How would I work and care for two small children at the same time?

I hate that word. A model of capitalism I want so desperately to be away from. But that’s what I did.

I Grinded. I Pushed.

I kept my head down, way down, in R&D for the bakery, in freelance writing, in reassuring Scarlett, in soothing Maddox, in securing childcare. I didn’t have time to be lonely, I just had to Make It.

I am Making It.

I don’t have any regrets from the last 365 days. Perhaps I wish I would’ve let myself sit with my loneliness more, so that I could have processed a bit better. Maybe I wouldn’t feel so blindsided, and maybe I still would.

I don’t have a choice but to be okay.

I’ve stuffed the idea of my loneliness into compartmentalized boxes around my head and heart, and I think I’ll spend some time unpacking those for awhile.

How grateful I am for the community I’ve built around me since. Oftentimes the closest thing I’ve known to consistency and safety. Never perfect, never expected to be, but steadfast and willing to allow me to lean when necessary.

What a year it’s been.

I’ve trusted strangers with my babies.

I’ve asked for more help than I ever have in my life.

I’ve had my work published.

I’ve been paralyzed by fear.

I’ve cooked for my babies and myself and my friends.

I’ve fallen on my face.

I have fallen in love.

I have picked up myself and my babies and the pieces that have subsequently fallen.

No surprise that the last year contained several.

If you’re reading this, I’m grateful for you and the community you bring to me. Whether I’ve hugged you in person, or my recipes, my children’s faces, or my words have simply landed on your screen.

I’m going to allow myself to feel lonely for a bit in an effort to hopefully leave this portion of my story behind. 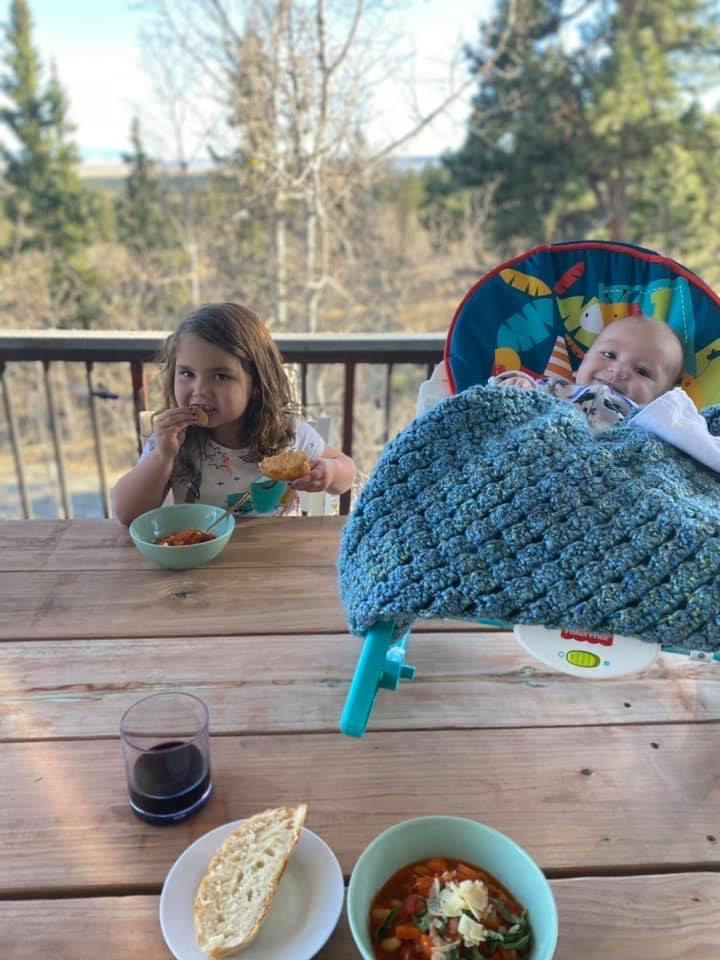